By signing up, you agree to our Terms And Conditions
Home > News > Little Luxuries – Monsoon Mangoes 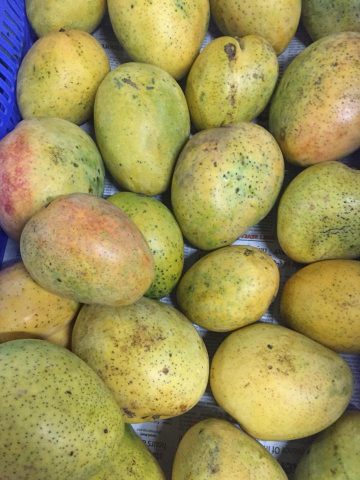 This column has hardly dealt with mangoes. This might seem odd since it is about edible Indian luxuries, and mangoes are our best example of them. One column was on the gorgeous Imam Pasand from south India, and another on the often overlooked joys of green mangoes, but that’s it and as mango season comes to a close, it does seem a bit odd. In particular, why have I avoided writing on Aphonsos?

This is not because I’m part of the Alphonso-bashing squad. This strikes me as such a daft attitude it is not even worth arguing with. In a recent, beautifully written piece by Sohail Hashmi on his memories of mangoes and one exceptional orchard in Rataul near Delhi, the one really silly note was his dismissal of Alphonsos as smelling like aam papad. What can one say to such prejudice other than to be happy that people who feel this way will be leaving more Alphonsos to be eaten by the rest of us.

If I haven’t written about Alphonsos it may be because I don’t know what to say. Yes, they are too expensive and yes, they are not the sweetest mangoes and yes, there is so much spurious or poorly harvested stuff that they can often be disappointing.

But if you know where to buy them (the big sellers in Crawford Market are really the best, unless you have access to a private orchard), are willing to pay (buying dead cheap is nearly always a mistake) and can wait till it is just irresistibly fragrant and warm to the touch (never store uncut mangoes in the fridge; if you want them chilled, just put them in briefly), then you will find a fruit where flavour, texture, aroma and taste comes together in an almost unreal way. Perhaps Alphonsos might be the last subject I write in this series. Perhaps I never will.

It might also seem odd for this column to be musing about mangoes when the monsoons are here, even if they are playing truant at the time of writing. I know people who rigidly refuse to eat mangoes once the monsoons are here. who see the end of May as the end of mangoes for the year. This again strikes me as really silly for multiple reasons. First, for anyone not living in the past, it is fairly clear that the monsoon now really only sets in towards the end of June.

This gives us a whole month of mango eating and one where supply has increased to the point where even quality Alphonsos are vaguely good value. And second, what this monsoon-no-mango attitude ignores is that in a country as large as India, with a variety of climate zones, even when the monsoon has set in at one part, there will still be places where its weeks away, not to mention the southern Coromandel Coast, which will only get the returning north-east monsoon from November onwards. So even if the mango season is tailing off on the Malabar and Konkan coasts, it is hitting its peak on the plains of Uttar Pradesh and Bihar, while Tamil Nadu will be enjoying mangoes for many weeks to come. In an ideal situation, we should be able to keep eating great mangoes well into the monsoons.

But here is where the parochialism of mango lovers is a problem, and I fully concede that Alphonso fanatics are as much, or even more to blame than most. At least in most parts of India you can usually get 6-7 types of mangoes, but in Mumbai it can be hard to find anything other than Alphonsos with only Pairis and Badamis humbly filling out the background.

Because it’s assumed that Mumbaikars won’t pay for other mangoes – or won’t pay the sort of prices that greedy Alphonso merchants have got used to – no one is importing the many other excellent mangoes from other parts of India.

And while Mumbai is the worst for this, other parts of India are also prejudiced – I can never find North Indian mangoes in Chennai, while Mr.P.B.Murali, whose incredible organic Banganapallis may be the best mangoes I’ve eaten this year, tells me that while he tried taking his mangoes to Delhi last year and selling them at Dilli Haat, this year he’s not bothering.

Nobody really gave them their due there, while in Chennai the demand for his crop from those who know about it is such that he almost has to institute rationing. I was lucky to get about a dozen when I was in Chennai some weeks back, and doled them out to friends in Mumbai, who were all bowled over by how good they were. (Maybe it’s a coincidence, but most of the really good mangoes I’ve had this year were organic, and I think this is testimony to the care with which they were grown and handled, whereas general producers are becoming careless).

I wish I could get good South Indian mangoes like Banganapallis and Imam Pasands in Mumbai, and also the famous Eastern ones, like Gulabkhas. Perhaps this is something the new gourmet food chains should consider next year, rather than just pandering to Alphonso-extremists. But I’m happy to note that at least some North Indian mangoes make it the market here, especially after July. Perhaps it’s because the monsoon-no-mangos buyers are withdrawing, and since in Mumbai most of them tend to Alphonso fanatics as well, so now sellers see some point in other kinds. There are pleasantly sweet Kesars now, the Rajapuris whose quality never quite lives up to their size (which Banganapallis and Imam Pasands do), but are nice enough, but above all there are Langras.

In places like Bihar, I know, Langra fanatics are like the Alphonso fanatics here, but I’m happy to love both, not least because how different they are. If Alphonsos are languid and perfumed aristocrats, Langras are scrappy, subversive extroverts. Their long green look is the first sign of how they break convention, since they never look ripe, even when they are. You have to take a gamble with Langras, but when you cut in and expose their almost neon-yellow flesh, they are usually sweet, but never in a cloying way.

Langras have an acid, exuberant edge which is what makes them amongst the most fun mangoes to eat. At a time like now, when the rains are here, but not here, driving us mad with mugginess and anticipation, the bracing kick of Langras, along with all the other mangoes still in the market, are a good reason to keep buying mangoes long after the monsoon may have set in.

Organic Shandy is one place where anyone interested in going organic can come and shop without any second thoughts. Every veggie may not look perfect but we know that it has been perfectly taken care of by natural remedies and has been completely under natures' care...untouched by chemical fertilizers and chemical pesticide. Thank you, Organic Shandy for helping us nurture our children safely! May you touch more lives with your organic vegetables and pulses.
Sumithra Srikanth
Excellent and complete Organic store in Mylapore, Chennai. They have variety of Rice, Millets, Brown Sugar, Jaggery, Rock/Sea Salt, Sesame Oil, Groundnut Oil, Coconut Oil & all sorts of dry provision that is completely chemical free. They sell Organic Mangoes in summer season - "Banganapalle" varieties. I bet that no other mango can beat their taste. Weekly 2 days they sell Vegetables, but they are bit costly. They even have organic milk with Vanam brand. 80% of their products are of their brand i.e they are packed in Plain polythene covers and 20% of other trusted brands. You can trust them 100% as their products are completely Organic in every sense. Please visit this store and sure you'd be a repeat customer.
Shyam Iyengar
Real organic shop!!
MGS Rajan
I love Sunday Shandy! Especially during Mango Season. The sweet lime squash is very good and refreshing! My family and I appreciate the hard work and ethos of Sunday Shandy and its owners. Thank you!
Jayalakshmi Bhaskar